We finished our exhibition with the work of Chantal Hassard but want to direct everybody to the Artistic Research Exhibition in New Dakota, June 26 – July 05, 2020. Due to the Covid-19 safety protocols, you are kindly requested to reserve a place by emailing: info@nieuwdakota.com

The exhibition displays the artwork made by the graduating students Emilija Angelovska, Alexis Boyd, Swaen Harmsen, Chantal Hassard and Miriam Sentler, and is curated by Mariana Lanari.

Chantal Hassard is a Canadian artist and filmmaker currently writing a master’s thesis at the University of Amsterdam on the production of alternative space by investigating the case of squatting in Amsterdam. She has a bachelor’s degree in Political Science and Visual Studies from the University of Toronto and has exhibited work in interactive art events at The Nieuw en Meer and Vondelpark in Amsterdam, Dufferin Grove and Art Gallery of Ontario in Toronto and on Governor’s Island in New York City. Her recent film Ludieke Actie: The Performative Nature of Paintbombs (2019) which focuses on the archive of the Dutch Squatter’s movement at the International Institute for Social History will be screened at the opening. 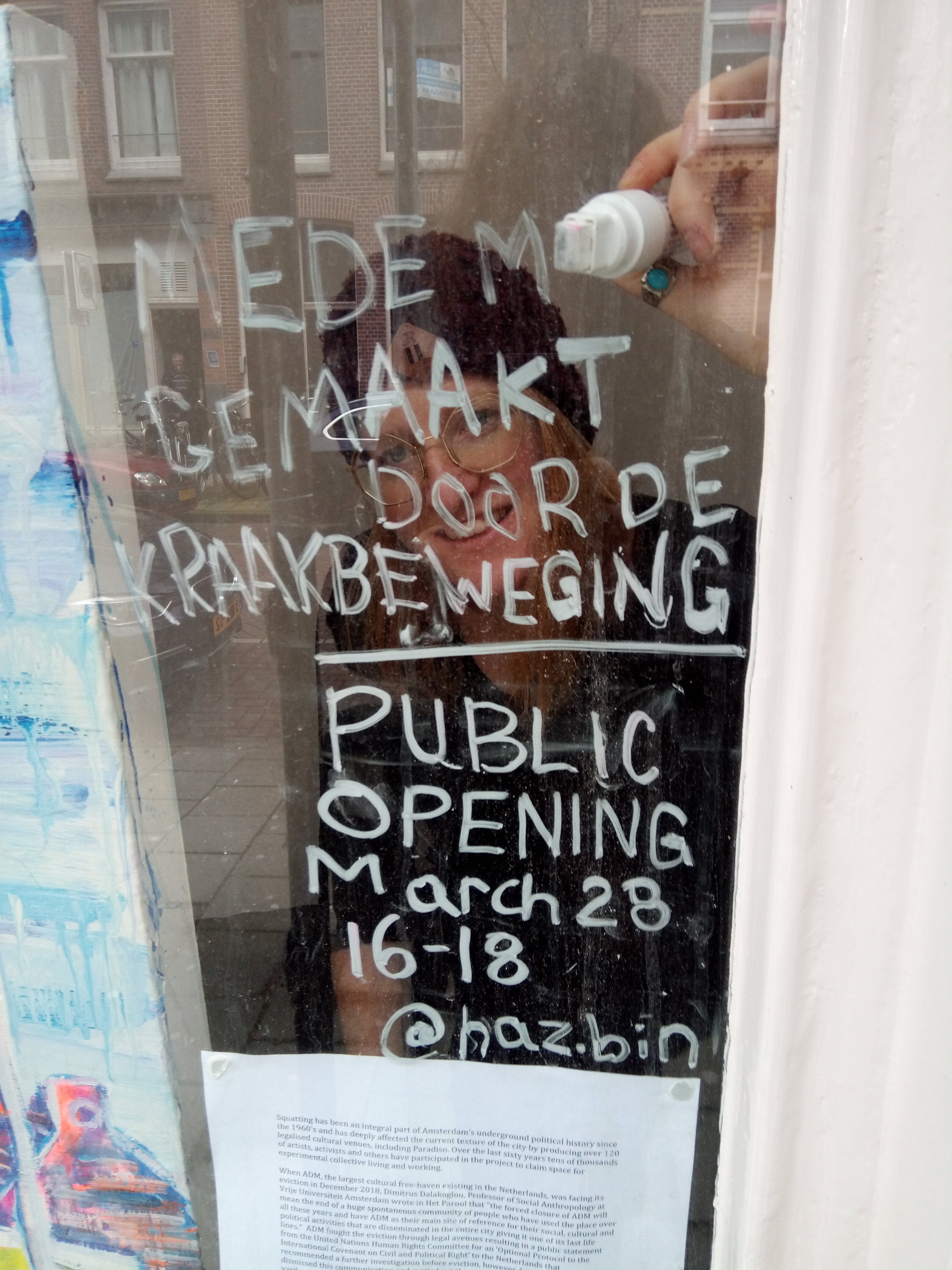 Squatting has been integral part of Amsterdam’s underground political history since the 1960’s and deeply affected the current texture of the city by producing over 120 legalised cultural venues and contributing to the physical preservation of de Pijp as a nineteenth century neighbourhood. The the w_show is part of a neighbourhood that was slated for demolition in the 1960’s as part of American traffic engineer David Jokinen’s plan Geef de Staad en Kens (Give the City a Chance) financed by the automobile industry lobby. Resistance against this redevelopment plan mobilised squatting groups throughout the city which continue to resist the rapid neoliberal gentrification in de Pijp by offering vokus, performance venues, artists studios and living space where critical countercultural ideas are exchanged and brought to life. Today the legacy of these movements is continually present in the area, evidenced by The Molli, a legalised squatbar that has existed since 1979 at Ostadestraat 55.

When ADM, the largest cultural free-haven existing in the Netherlands was facing its eviction in December 2018, Dimitrus Dalakoglou, Professor of Social Anthropology at Vrije Universiteit Amsterdam wrote in Het Parool that “the forced closure of ADM will mean the end of a huge spontaneous community of people who have used the place over all these years and have ADM as their main site of reference for their social, cultural and political activities that are disseminated in the entire city giving it one of its last life lines”.  ADM fought the eviction through legal avenues resulting in a public statement from the United Nations Human Rights Committee for an Optional Protocol to the International Covenant on Civil and Political Right to the Netherlands that recommended a further investigation before eviction, however Amsterdam authorities dismissed this communication and carried out the eviction. The historic ship building yard was torn down to avoid a re-squat, forcing about a hundred people from the space they had built a community in over 21 years. This municipal violation of United Nations Human Rights Committee recommendation might have, in a different political climate, been a galvanising force for public debate around the future of free spaces. Instead, the event went relatively unacknowledged in mainstream Dutch and international media. 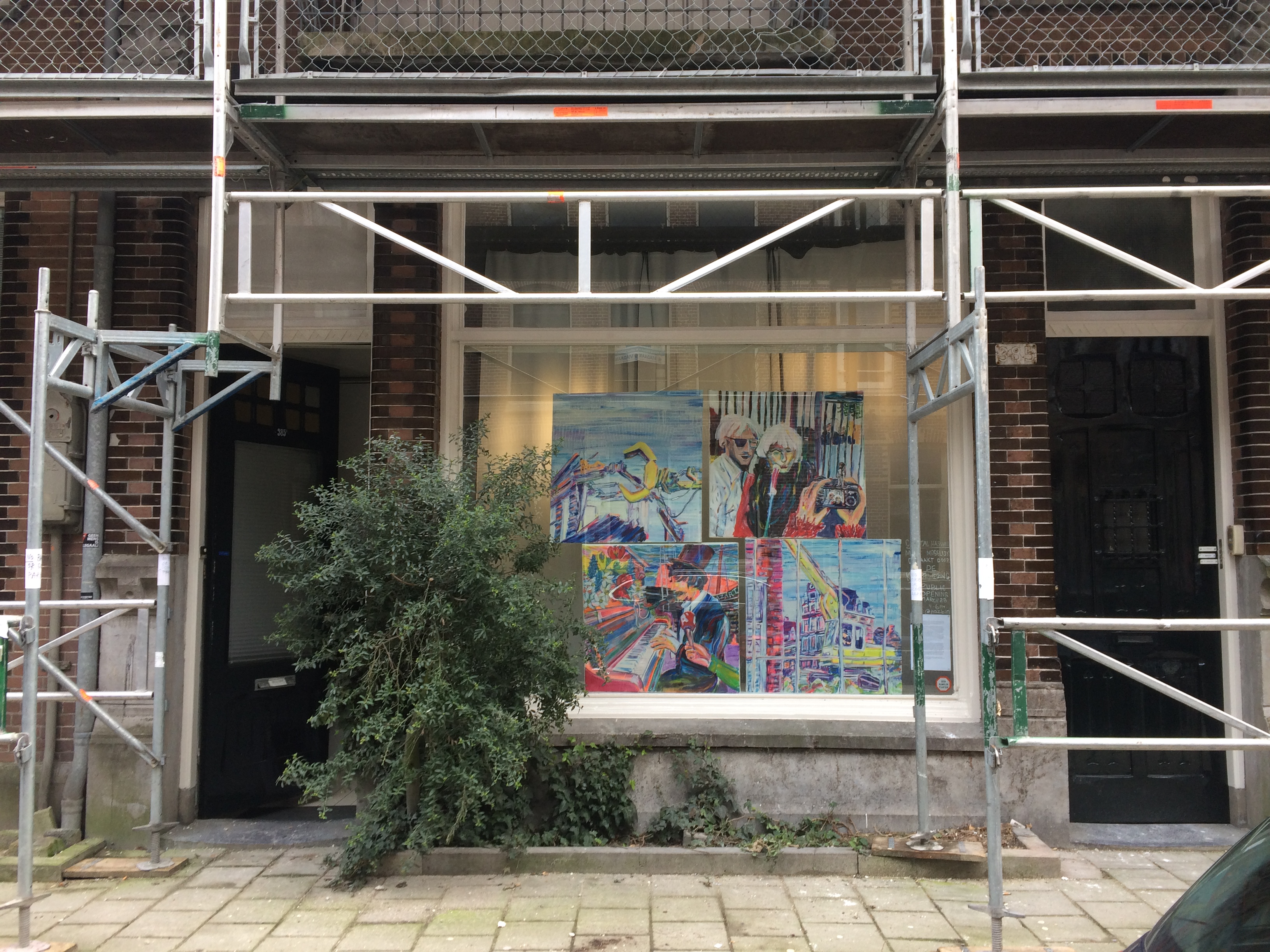 Since the ‘The Squatting and Vacancy Act’ (Wet Kraken en Leegstand) criminalised squatting in 2010, the most active squatting collectives have been associated with the ‘We Are Here’ movement which squats to access housing for refugees and migrants whose application for an official status in the Netherlands has been rejected and who cannot return to their country of origin, yet are not allowed to work or access regular housing. The group has occupied fifty buildings in the Netherlands since it formed in 2012, but in 2019 Amsterdam Mayor Femke Halsema discussed making the enforcement of the Dutch Squatting Ban tougher by suggesting that the immigration police could be employed to stop the ‘We Are Here’ collective squatting.  The tradition in Amsterdam is that illegal migrants are not searched for by the police, and so The Vrankrijk, one of the last visible squatted buildings on Spuistraat, has responded by hanging a beautiful banner saying “Amsterdam a free city? Stop the criminalisation of refugees! Helsma has chosen her side! Which side are you on?” The ‘We Are Here’ group is a critical crossroad where radical, if temporary, solutions to a global refugee crisis has been made possible at a local level through the squatting of otherwied unused buildings.  Over the last sixty years tens of thousands of artists, activists and others have participated in the project to claim autonomous space for experimental collective living and working purposes. Squatting networks have functioned for generations in Amsterdam; a city where a vibrant underground is now more necessary than ever as do-it-yourself resistance effort against capital-driven cultural and spatial oppression.